Chickahominy Indians Paying Tribute to the Governor of Virginia.

Chickahominy Indians Paying Tribute to the Governor of Virginia.

Chickahominy tribal members visit the Executive Mansion in Richmond on December 10, 1919, to present Governor Westmoreland Davis with game. The annual tribute honored the terms of the treaty ending the Third Anglo-Powhatan War (1644–1646). In exchange for loyalty to the Crown, the Chickahominies received military protection from the English. The annual ceremony continues to be observed by the Pamunkey and Mattaponi tribes but not the Chickahominy.

The photographer, James Mooney (1861–1921), was an Indiana native who worked for the Smithsonian Institution's Bureau of American Ethnology compiling information about American Indian tribes.

This image was obtained from the Smithsonian Institution. Unless otherwise noted, this image or its content may be protected by international copyright laws. Reproduction, exhibition and distribution of this image are strictly prohibited without prior written permission from the National Anthropological Archives and Human Studies Film Archives. 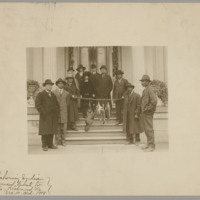