This romanticized 1845 oil painting is believed to represent seventeenth-century English colonist John Rolfe and his wife, Pocahontas. Partially dressed in armor, Rolfe has one arm around his Indian bride and his other hand touching the base of a crucifix; the artist has anglicized Pocahontas's features. The parted curtain behind them reveals a distant view of the ocean and ships.

Pocahontas was a daughter of Powhatan, paramount chief of an alliance of Virginia Indians in Tidewater Virginia. Sometime around 1610, she married an Indian named Kocoum, and in 1613 she was captured by the English and confined at Jamestown and Henricus, where she converted to Christianity and married colonist John Rolfe. The marriage, approved by Powhatan, brought an end to the First Anglo-Powhatan War (1609–1614) and set the stage for Pocahontas's visit to London in 1616. On behalf of the Virginia Company of London, she met both King James I and the bishop of London. Early in her return voyage to Virginia, she became ill and died at Gravesend in March 1617. In the centuries since, the story of Pocahontas's life has slipped into myth. 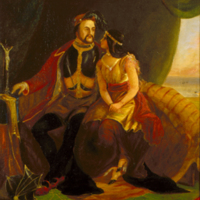