An Indian woman and man pose under a banner that reads, "Ples de Virginie." The first word may be an abbreviation for "peuples" or (peoples), or, less likely, for "perles" (pearls), in reference to the figures' necklaces. Although the engraving indicates Virginia as its setting, the garments suggest otherwise. The feather crown worn by the man on the right is Brazilian in style.

The engraving first appeared in Description de l'Univers, a five-volume encyclopedia of maps and geographical information compiled by Alain Manesson Mallet (1630–1706) and first published in Paris in 1683. Mallet rendered many of the engravings himself, but it is unknown whether this is his work.

The creator of this engraving may have found a source in the work of Theodor de Bry (1528–1598). De Bry made a number of engravings of Indians based on the watercolors of John White and the descriptions of Thomas Hariot, both of whom had visited America. 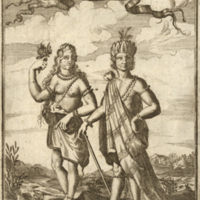