This map of Virginia and the Carolinas by the Dutch cartographer Jodocus Hondius (1583–1612) combines the efforts of two previous mapmakers, John White and Jacques le Moyne (ca. 1533–1588), both of whom, unlike Hondius, had visited the area. 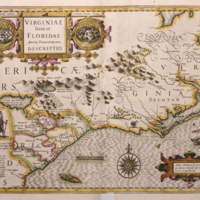