The Virginia Indian Pocahontas pleads for the life of Jamestown colonist John Smith in this reenactment of the legendary 1607 event. Three hundred years after the dramatic rescue, members of the Pamunkey Indian tribe recreated this scene at the Jamestown Exposition; the tableau is captured here in this stereocard photograph.

An iconic figure in American history, Pocahontas is largely known for saving the life of John Smith and then romancing him—although both events are unlikely to be true. Nevertheless, the mythical Pocahontas continues to survive: both the Walt Disney animated feature Pocahontas (1995) and the Terrence Malick film The New World (2005) emphasize an unlikely romance between the young girl and Smith. 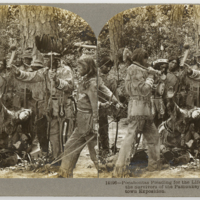