Pocahontas wears pearls and a European-style fashionable dress in this mid-nineteenth-century oil painting by Thomas Sully. The legendary Indian is portrayed here at a key moment in her life: after she had begun to assimilate to English culture, but before her ill-fated trip to England in 1616. Early in her return voyage to Virginia, she became ill and died at Gravesend in March 1617.

Sully was born in England but immigrated with his family to Richmond in 1792. He became a renowned portraitist in Philadelphia, where he worked for most of his professional life. With growing sectionalism dividing the country in the mid-nineteenth-century, Sully painted this image, which would surely appeal to Virginians, and donated it to the Virginia Historical Society. 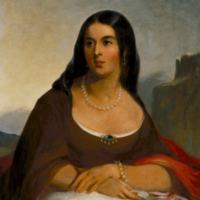