The manner of their fishing

The manner of their fishing

A group of Indians is portrayed using fire, spears, and traps to catch fish in this watercolor painting by John White, the English artist who in 1585 accompanied a failed colonizing expedition to Roanoke Island in present-day North Carolina.

Thomas Hariot, who accompanied White and the colonists, later described how the Indians "by nighte or day [struck] fishes, and take them opp into their boates." At night, fire may have been used as bait, attracting fish to its light. White depicted a brown pelican, swans, geese, ducks, hammerhead sharks, and sturgeon, although the latter two would not normally have been found in shallow waters. 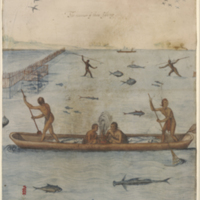