The wife of an Indian weroance, or chief, raises her arms to cover her breasts and crosses her legs in this watercolor painting by John White. Her posture, according to Thomas Hariot, was a "token of maydenlike modestye." Unlike other Indian women depicted by White, she wears an actual necklace of alternating beads rather than having the image of one tattooed on her body. She has body art on her arms and legs, however, which was normal for women, not men, in Algonquian-speaking cultures.

An inscription on the painting reads, "One of the wyves of Wyngyno," which likely refers to Wingina, the leader of the Roanoke Indians, who later changed his name to Pemisapan.

White, an English artist, created the image when he accompanied a failed colonizing expedition to Roanoke Island in present-day North Carolina. White produced a series of images of the Indians he encountered in the Outer Banks region; their language and culture were closely related to that of the Powhatan Indians of Tidewater Virginia, making White's paintings a valuable source of information about both groups. 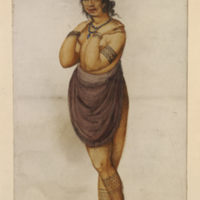