An Indian priest, or kwiokos, is depicted in the midst of a ritual dance in this watercolor by John White, the English artist who in 1585 accompanied a failed colonizing expedition to Roanoke Island in present-day North Carolina.

Thomas Hariot, who accompanied White and the other colonists, later wrote that these "conjurors," as he called them, were soothsayers, "For they be verye familiar with devils, of whome they enquier what their enemys doe, or other suche thinges." And he described their appearance as follows: "They shave all their heads saving their creste which they weare as other doe, and fasten a small black birde above one of their ears as a badge of their office. They weare nothinge but a skinne which hangeth down from their gyrdle …" A pouch also hangs from the conjuror's belt and it was probably filled with tobacco or other plants, herbs, or powders. Priests held special spiritual knowledge and served as healers. 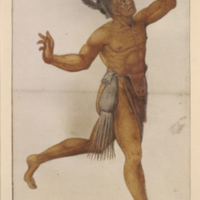