An Indian weroance, or chief, poses in this watercolor by John White, the English artist who in 1585 accompanied a failed colonizing expedition to Roanoke Island in present-day North Carolina. Some scholars argue that this figure represents the Roanoke Indian chief Wingina, who later changed his name to Pemisapan. Possibly believing that he was about to attack them, the English colonists attacked and killed Pemisapan on June 1, 1586. 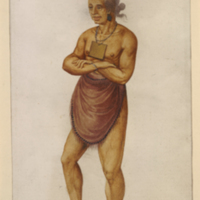