The manner of their attire

The manner of their attire

English artist John White's original watercolor of a single Indian weroance, or chief, shows him holding a bow and looking to his right with one arm akimbo. The drawing carries the inscription, "The manner of their attire and painting them selves when they goe to their generall huntings, or at theire Solemne feasts." (Some spelling has been modernized.) This figure was based on White's firsthand encounters with the Indians he met in the Outer Banks region of present-day North Carolina in 1585, and the image is one of a series of seventy-five watercolor drawings that were assembled into an album currently owned by the British Museum.

The posture of the figure mirrors the manner in which powerful European aristocrats and leaders were painted at that time. This portrayal of the Algonquian chief became the iconic image for nearly all North American Indians encountered early on by Europeans. Variations on this figure were subsequently created by other artists, including Theodor de Bry, who illustrated a 1590 edition of A briefe and true report of the new found land of Virginia by Thomas Hariot. An English mathematician, astronomer, linguist, and experimental scientist, Hariot accompanied White in his explorations while part of the failed colonizing expedition to Roanoke in 1585 to 1586. Hariot's text described the chief's attire, writing that the Indian's fringed apron was made of animal skin with a tail that hung down behind him. A quiver of arrows was affixed to the tail. The Indian's hair, adorned with feathers, was shaved on one side to prevent it, according to Hariot, from getting tangled in the bow. 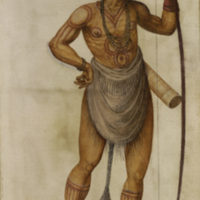