Two members of the Mattaponi Tribe present a gift to Virginia governor Mills E. Godwin Jr. (center) on the steps of the State Capitol in Richmond on November 24, 1976. A man at left holds a long stick with fish and quail tied to it, while at right a man holds a banner of deerskin canvas with an attached pipe. It reads "MattaPoni Indian Reservation / 1658–1976 // Mills E. Godwin / Governor of Virginia / 1776–1976 // Presented by / Chief [Curtis Custalow]."

The annual tribute honored the terms of the treaty ending the Third Anglo-Powhatan War (1644–1646). In exchange for loyalty to the Crown, the signatory tribes received military protection from the English. The annual ceremony continues to be observed by the Pamunkey and Mattaponi tribes. 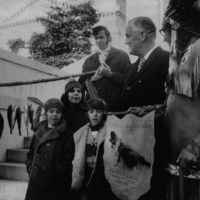