Clifton Holmes, a member of the Chickahominy Indian tribe, gives a speech while his daughter tries to climb up the podium on September 28, 1969. The girl's mother can be seen reaching for her daughter. The photograph, by Lawrence Brown, was taken at the twentieth annual Chickahominy Indian Fall Festival at Roxbury in Charles City County, an event sponsored jointly by the tribe and the Woodmen of the World. 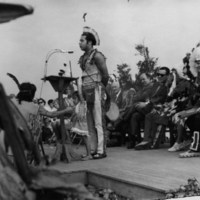