This map shows the proposed Beringia land route as well as the locations of pre-Clovis archaeological sites in North America.

Clovis-age culture dates to approximately 13,000 years ago and is named for stone and bone projectile points—so-called Clovis points used on spears, darts, arrows, and knives—found near Clovis, New Mexico, in the mid-1930s. Scholars long believed that Clovis culture represented the earliest human habitation in America until sites such as Cactus Hill in Virginia were excavated and showed evidence of pre-Clovis culture.

Prior to the discovery of pre-Clovis sites, many scholars believed that the first Americans arrived from Siberia via the so-called Bering land bridge, also known as Beringia, approximately 13,500 years ago.

Courtesy of the TransPacific Project 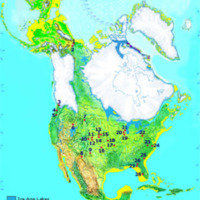