Powhatan, paramount chief of Tsenacomoco, a political alliance of Virginia Indians, is shown seated at top, in this detail from the map of Virginia published in Captain John Smith's The Generall Historie of Virginia, New-England, and the Summer Isles (1624). The caption beneath the image describes this as the scene that Smith encountered when he was delivered to Powhatan as a prisoner in 1607.

Courtesy of the Library of Virginia 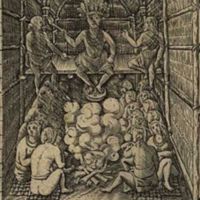