In this historical painting by Martin Pate, three Indian women in the present-day Carolinas kneel on mats and make ceramic pottery during the Late Woodland Period (AD 900–1650). Archaeologists and anthropologists believe that it was during this period that Virginia Indians settled into towns, raised crops, and made ceramics. The painting depicts typically rounded house types and a dog, the only animal domesticated by Virginia Indians. 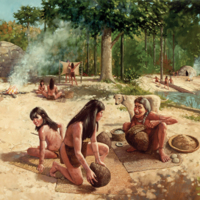