Chief Running Deer, of the Rappahannock Indians, prepares to throw a stone-pointed spear at a fish in the James River at the Jamestown Festival Park. At the time Chiles T. Larson took this undated photograph, Running Deer served as a historical interpreter at the park. Spearing was one method used to catch fish by the Indians of Tsenacomoco, who lived in the area now known as Virginia at the time the English settled Jamestown. 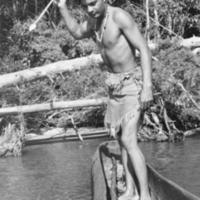