A group expedition, led by Mann Satterwhite Valentine II (1824–1892), pictured sixth from right, pose for an unknown photographer at an unknown location sometime in the 1880s. Valentine, with his brother, the sculptor Edward Virginius Valentine (1838–1930), led a number of such expeditions to western Virginia and North Carolina with the intention of excavating suspected Indian mounds for artifacts. The owner of Valentine's Meat-Juice in Richmond, Mann Valentine died in 1892. His brother opened the city's first private museum in 1898. 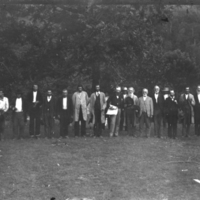