A parade float moves down a Richmond street during the Virginia Historical Pageant, held May 22–28, 1922. The banner reads, "Pocahontas-John Rolfe visit Chief Powhatan at his home. Falls of the James 1615." Pocahontas, daughter of Powhatan, paramount chief of the political alliance Tsenacomoco, married the Englishman John Rolfe on or about April 5, 1614. 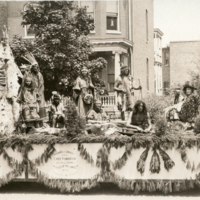