A group of Indians is portrayed using fire, spears, and traps to catch fish in this colored engraving by Theodor de Bry based on a watercolor painting by John White. Adding considerable detail to White's eyewitness sketch, de Bry shows life as it was lived by the Algonquian-speaking Indians in the Outer Banks region of present-day North Carolina. These Indians are closely related in language and culture to the Indians of Tidewater Virginia, and White's paintings are an important source of historical and ethnographic information about both groups.

White's original painting showed fewer fish and fishermen and less intricate weirs, or traps. De Bry's additions, probably an attempt to highlight Virginia's abundance, were based on descriptions by Thomas Hariot, who accompanied White and approximately 600 colonists to Roanoke in 1585. In a caption to the engraving, Hariot described how the Indians "by nighte or day [struck] fishes, and take them opp into their boates." At night, fire may have been used as bait, attracting fish to its light. White's original depictions of a brown pelican, swans, geese, and ducks are reproduced here, as are the hammerhead shark, sturgeon, and king crab. De Bry added loggerhead turtles, land crabs, and other fish, based either on lost White paintings or on the work of other artists. 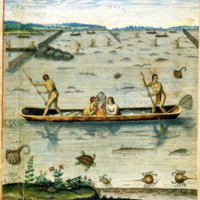