An Indian man is depicted carrying a bow and arrow, a quiver slung across his back, in this colored engraving by Theodor de Bry based on the watercolor paintings of John White. A tattoo is shown on the Indian's back, with various other kinds of tattoos, keyed to textual descriptions, drawn in the background.

White traveled with English colonists, including the scientist Thomas Hariot, to Roanoke in 1585–1586. De Bry's subsequent engravings accompanied Hariot's A briefe and true report of the new found land of Virginia (1588). This rare, hand-colored version of the illustration appeared in a 1590 edition published in Latin.

The book's text—originally translated into English by Richard Hakluyt the Younger and here modernized—explains the markings shown in the engraving:

"Most of the inhabitants of the whole province have a tattoo displayed on the back, by which they are able to discern to which chief they are beholden or which region they are from. For this reason we have depicted the marks in this figure, with the names of the places added, so that they may be recognized more easily. God granted them this method, although they are very simple; and to tell the truth, I do not recall seeing a more honest or peaceful people.

"The marks I saw, then, are here set down in order.

"The one indicated by the letter A is that of Wingino, the Lord of Roanoac.

"The one having the letter B is Wingino's relation by marriage.

"Indicated by letters C and D are the marks of various important men in [the town of] Secota.

"To these are added letters E, F, and G, the marks of the chief men in [the towns of] Pomeiooc and Aquaskogoc." 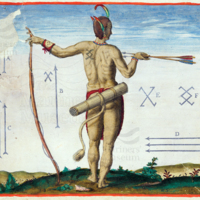