The Roanoke Indian town of Pomeiooc is depicted in this colored engraving by Theodor de Bry based on a watercolor painting by John White. Adding considerable detail to White's eyewitness sketch, de Bry shows village life as it was lived by the Algonquian-speaking Indians in the Outer Banks region of present-day North Carolina. These Indians are closely related in language and culture to the Indians of Tidewater Virginia, and White's works, along with their related engravings, are important sources of historical and ethnographic information about both groups.

White's original painting had the following inscription beneath it: "The towne of Pomeiock and true forme of their howses, couered and enclosed some wth matts, and some with barcks of trees. All compassed abowt with smale poles stock thick together in stedd of a wall." The largest longhouse, designated here as "B," was described as being the "king's lodging"; the structure with the pointed roof, designated "A," was referred to as the "tempel" of the village. De Bry added a number of elements, including a pond at upper right, a field of corn, as well as flowers and trees. A domestic dog, which was part of the original White painting, was not included in this version. De Bry based his engravings in part on descriptions by Thomas Hariot, who accompanied White and approximately 600 colonists to Roanoke in 1585. A group of about sixty Englishmen, led by their Indian guide Manteo, visited Pomeiooc in mid-July. 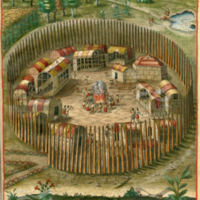