Two Indian chiefs, or weroances, are portrayed in this colored engraving by Theodor de Bry based on a watercolor painting by John White. Adding considerable detail to White's eyewitness sketch, de Bry shows life as it was lived by the Algonquian-speaking Indians in the Outer Banks region of present-day North Carolina. These Indians are closely related in language and culture to the Indians of Tidewater Virginia, and White's paintings are an important source of historical and ethnographic information about both groups.

White's original painting, of a single chief holding a bow and looking to his right with one arm akimbo, carries the inscription, "The manner of their attire and painting them selves when they goe to their generall huntings, or at theire Solemne feasts." The posture of the figure mirrors the manner in which powerful European aristocrats and leaders were painted at that time. This portrayal of the Algonquian chief became the iconic image for nearly all North American Indians encountered early on by Europeans, and countless variations on the figure were created by other artists. In this version, de Bry includes Indians hunting deer in the background, as well as a view of a chief's back side. The engraver used details based in part on descriptions by Thomas Hariot, who accompanied White and approximately 600 colonists to Roanoke in 1585. Hariot wrote that chiefs wore aprons made of animal skin with a tail that hung down behind them, between their buttocks. The tail was used in carrying a quiver of arrows. The Indians' hair, adorned with feathers, was shaved on the right side. 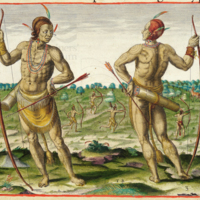