Anglorum in Virginiam aduentus (The Arrival of the English in Virginia

Anglorum in Virginiam aduentus (The Arrival of the English in Virginia

English colonists approach the island of Roanoke in a small boat in 1585 in this colored engraving by Theodor de Bry based on a watercolor painting by John White. Due to shallow waters, the English had difficulty finding a safe passage to the protected island, and several of their ships (seen in the foreground) foundered in the shoals. The location of various Virginia Indian groups and villages are also shown on the map. De Bry added details to his engravings based on descriptions by Thomas Hariot, who accompanied White and approximately 600 colonists to Roanoke in 1585. 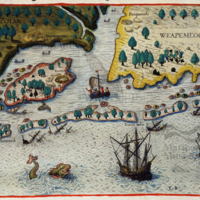