Chickahominy Indians pose in regalia at an unknown location sometime after 1920. They are probably in Richmond to present their annual tribute to the governor. The annual ceremony honored the terms of the treaty ending the Third Anglo-Powhatan War (1644–1646). In exchange for loyalty to the Crown, the Chickahominy Indians received military protection from the English. The annual ceremony continues to be observed by the Pamunkey and Mattaponi tribes but not the Chickahominy. 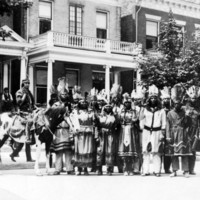