Young Men at Hampton Normal and Agricultural Institute, 1878, Upon Arrival

Young Men at Hampton Normal and Agricultural Institute, 1878, Upon Arrival

Ten male American Indian students pose for an unknown photographer at the Hampton Normal and Agricultural Institute in November 1878. The first of a "before and after" pair of images, this photograph shows the men in native dress upon their arrival at the school. The second image, taken two years later, showed eight of the ten men in Western-style suits and ties. (The fates of the missing two are unknown.) Together, the photographs demonstrated how the school had "civilized" the young men.

Hampton was chartered in 1870 as a land grant school and exclusively served African Americans until 1878, when it accepted its first American Indians, most of whom were from the western United States. 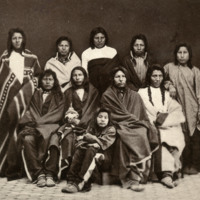