These quartz projectile points were found at a Late Woodland site in Halifax County in the southern Piedmont. They are mostly triangular and made from vein quartz or quartz crystal. Triangular points became dominant in the Middle and Late Woodland periods and are thought to be associated with the widespread use of the bow and arrow during this time. The fifth specimen in the third row is an Early Archaic LeCroy point, and the second specimen in the fourth row is made of smoky quartz and is an earlier variety. 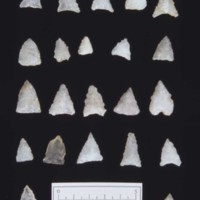