A child and an elderly woman, both Monacan Indians, pose in the door of a log cabin at the Monacan Indian settlement in Amherst County in 1914. The woman was reportedly the grandmother of forty-three or forty-eight children, most of whom, according to the photographer, had attended school.

Founded in 1908 by the Episcopal minister Arthur Gray, the one-room school at the settlement enrolled students through the seventh grade until public school desegregation in 1963. Jackson Davis (1882–1947) was a Cumberland County native who took this photograph and many others of the Monacans as part of a series documenting the education of minority groups in Virginia. 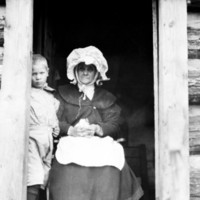