In a newspaper article headlined "Heart-to-Health Talk with Virginia Red Men" and published in the Richmond Times-Dispatch on August 25, 1908, the writer describes new phonographic technology and how it was used to reproduce, for Indians living in Amherst County, a lecture on tuberculosis.

Courtesy of the Richmond Times-Dispatch

PHONOGRAPH TO TALK ON HEALTH

Makes First Trial to Be Reproduced in Amherst to Indian Tribe.

Talking into a phonograph in Richmond and having the records sent for reproduction in various sections of the state is the latest idea of Dr. Ennion G. Williams, State Health Commissioner, and though this innovation is yet in its experimental stage, it is believed it will prove successful, and be extended so as to result in great benefit to the public health.

The idea was conceived by Dr. Williams and has been put into practical operation in Amherst County. Demands were made upon him to go to Amherst to speak to a tribe of Indians located there upon precautionary methods looking to the prevention and cure of tuberculosis. Dr. Williams found that his duties at the department were such as to prevent his leaving the city for some time, so he held a conference with Rev. Arthur P. Gray Jr., who has charge of the Episcopal Mission in the county, and who had asked him to make a visit and address the Indians concerning health measures.

Dr. Williams suggested talking into a phonograph and trying the experiment of having the record of his lecture reproduced at a meeting of the tribe by Mr. Gray. The latter readily agreed, and said he had a machine which he thought would prove satisfactory. Accordingly, Dr. Williams went to the headquarters of one of the big phonograph agencies here and talked into a machine a carefully prepared lecture on the treatment of tuberculosis. His language was simple and every point brought out by the distinguished physician was carefully explained. This extraordinary care was taken at the insistence of Mr. Gray, who declared that the Indians are, of course, not well educated, and therefore do not quickly grasp the meaning of the English language unless it is put to them in the simplest form. Dr. Williams has had no report so far from his new venture, though both he and Mr. Gray are hopeful that it will prove successful and beneficial to the health of the community where it is tried. If they are correct in this regard, the system will probably be enlarged to a great extent, and it may be carried into the public schools of the state where there is much demand for scientific lectures concerning the public health.

There are but two organized Indian tribes in the state. The one is in King William and the other in Amherst. Mr. Gray has for some time displayed much interest in the latter, and he is gradually interesting the members in questions concerning their health.

Dr. Williams is getting his new department in fine working order, and he and the members of the State Board appear highly encouraged at the outlook for its success.

Dr. Allen Freeman who is first assistant to Dr. Williams, is absent in attendance upon the sessions of a National Medical Association in the Northwest, and Dr. Meade Fergusson, the bacteriologist of the department, is at Blacksburg at the bedside of his wife, who is ill.

Dr. Williams is therefore quite busy at this time, and it was largely for this reason that he is being kept so closely at his desk that the idea of adopting the phonograph as a means of transmitting health lectures suggested itself to him. Those interested in health measures will watch the progress of the new movement with much interest. 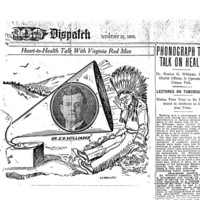 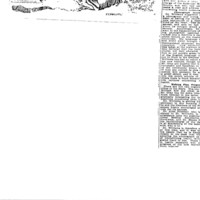