A modern map shows the locations of various Indian groups in Tidewater Virginia that in 1607 constituted the Powhatan paramount chiefdom. By 1607, Powhatan had expanded his domain, through a combination of force and diplomacy, to between twenty-eight and thirty-two groups anchored by the Powhatan Indians and five others: the Pamunkey, the Arrohateck, the Appamattuck, the Youghtanund, and the Mattaponi. While the core groups were situated along the James, Mattaponi, and Pamunkey rivers, the land the Indians called Tsenacomoco extended from north of the Rappahannock to the south side of the James, from the fall line to the Eastern Shore. 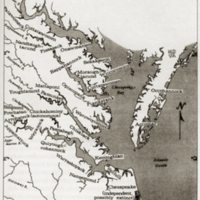